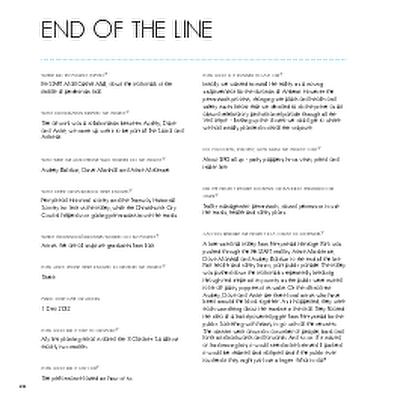 End of the Line

Material relating to a Transitional Cities project, titled 'End of the Line'. The project description reads, "A bite-sized rail trolley from Ferrymead Heritage Park was pushed through the Re:START mall by Annie Mackenzie, Dave Marshall and Audrey Baldwin to the end of the line. Part health and safety fiasco, part public parade. The trolley was pushed down the tram tracks repeatedly breaking through red crepe on its journey as the public were invited to let off party poppers in its wake. Or the official text: Audrey, Dave and Annie are three local artists who have been around the block together. As it happened, they were each wondering about the tramline in the mall. They floated the idea of a hand-powered jigger from Ferrymead for the public. Something with history to go with all the newness. The consent went around to a number of people, back and forth and backwards and forwards. And so on. If it moved, or had moving bits, it would need to be licensed. If parked it would be chained and clamped and if the public ever touched it they might just lose a finger. What to do?". 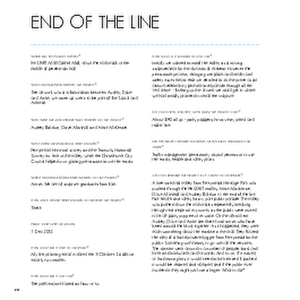 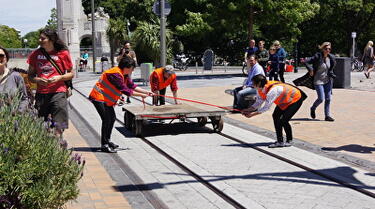 End of the Line Photograph 1 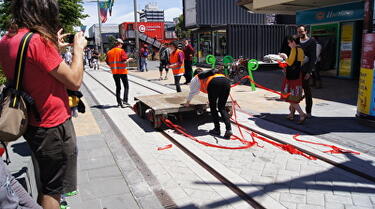 End of the Line Photograph 2 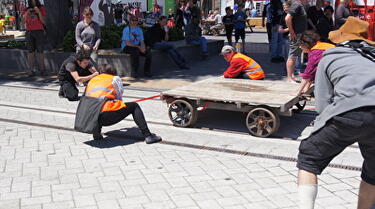 End of the Line Photograph 3 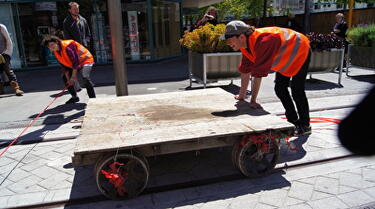 End of the Line Photograph 4