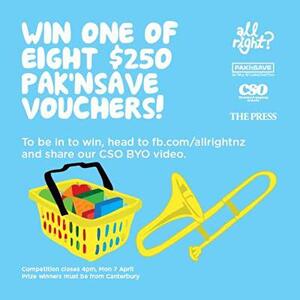 dc.title
All Right? Social Media: Facebook Profile Picture 43
dc.description
An image used as a profile picture on the All Right? Facebook page. The image reads, "Win one of eight $250 Pak'nSave vouchers!" The prize draw was a part of 'Outrageous Burst of All Right: BYO CSO'. This involved the Christchurch Symphony Orchestra surprised customers at Wainoni Pak'nSave by setting up and performing a piece of music in the supermarket itself. The performance and customers reactions were filmed and shared on social media, with All Right? encouraging their followers to share the video around by entering everyone who shared the video into the prize draw for one of eight $250 Pak'nSave vouchers.